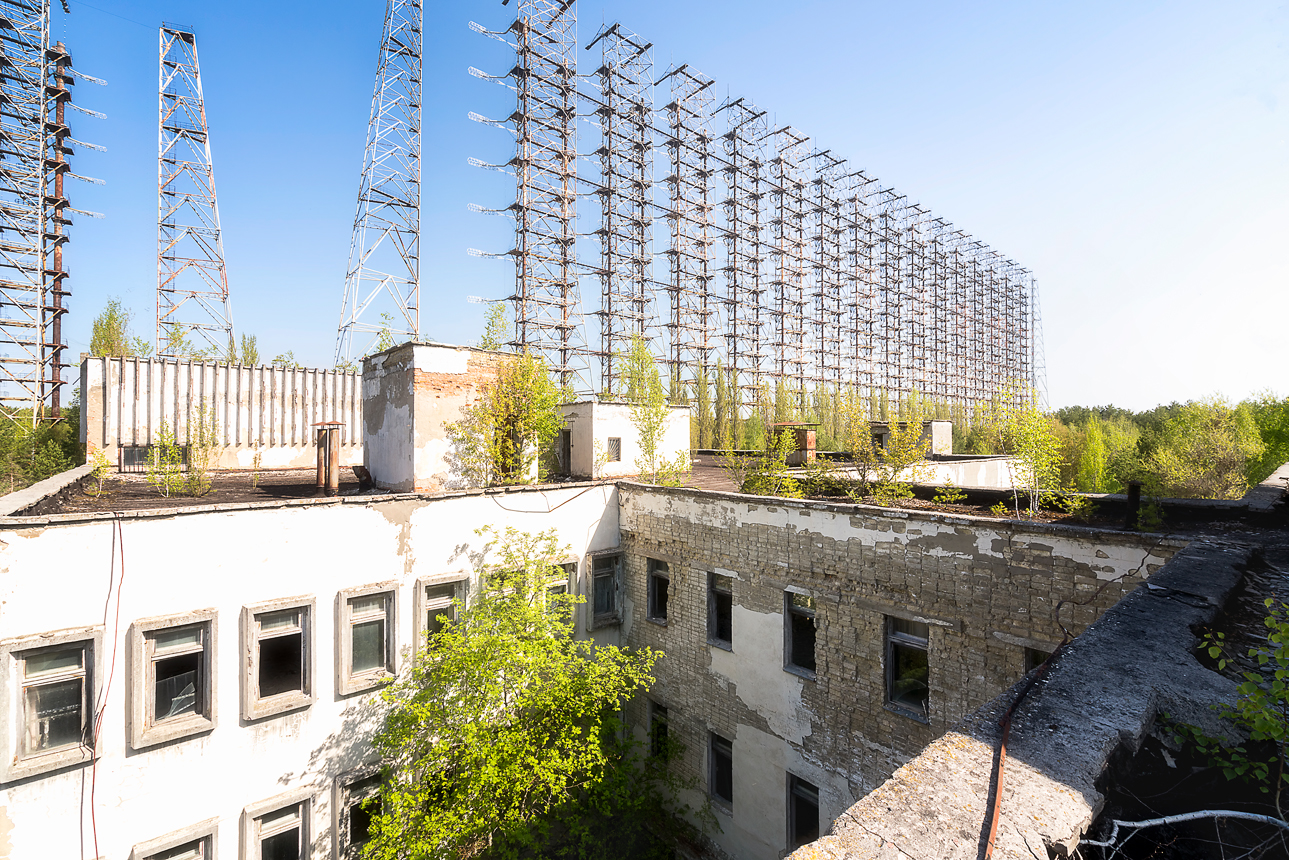 The Duga-3 OTH (Over The Horizon) radar system is an immense construction. When I visited Chernobyl in May 2017, I wasn’t really bothered with the radar system at first. Thinking it was only an antenna, I couldn’t be more surprised how extremely interesting the whole area around the antenna actually is. Hidden in a forest specifically created to hide the antenna’s, lies a city where the residents worked in secret for this project. In this blog, I would mainly like to show you what else can be found in the area around the antenna’s, and dive into a little history of this mysterious object.

The first plans to create a system like the Duga-3 radar originate from 1946. Ballistic missiles kept extending their range, and counter measures had to be taken. Engineer Nikolay Ivanovichem Kabanovym was the first person in the world to propose a short-wave band for a radar system to detect incoming missiles within 3000 kilometers. Research started and the project was named ‘Vejer’. It took years before the first system would be active. In the 60’s the progress was pressurized due to extensive threats for a missile attack.

In 1970 the first prototype was built in the Ukrainian city Nikolajev. This was Duga-1. It was a big metal construction that was 135 meters high and 300 meters wide. On it, 330 antennas were placed with a size of 15 meters each. The system had a range of 3000 kilometers. In 1971 the ground station was put in use to monitor the airspace of China. Two years before, a nuclear war with China was just averted.

In the 1980’s, two other systems were put in use. Duga-2 was located in Komsomolsk-on-Amur, and Duga-3 was located nearby the nuclear power-plant of Chernobyl. The project for Duga-3 turned out to be twice as expensive as the nuclear power-plant in Chernobyl. However, when the disaster at Chernobyl occurred the Duga-3 radar system was built within the 30 kilometers zone that had to be evacuated. Therefore, the super-secret system had to be closed. It never really functioned.

Duga-1 and Duga-2 have been (partially) demolished. Duga-3 is the only remaining over the horizon radar system that is still intact.

The Duga-3 radar system was nicknamed ‘The Russian Woodpecker’ by amateur radio operators, because of the sharp and repetitive 10Hz tapping noise it created on shortwave radio bands. This noise wasn’t perceived for many years, but rumour goes it’s recently been detected again. The Duga-3 radar system has also been called ‘The Eye of Moscow’, which was part of speculation that the system was used for mind-control and weather-control.

While putting a lot of work into researching the Duga-3 area, I came across many conspiracy theories. One of the most interesting ones, is the theory that’s being revealed in the 2015 movie and ‘The Russian Woodpecker‘. As mentioned above, the Duga-3 project was very expensive and costs (7 billion Russian Ruble) were twice as high as building the power-plant at Chernobyl. A very high ranked political figure was responsible for the project. Failing the deadline or functional delivery of a project this expensive, could lead to the death penalty at that time.

The theory goes that the disaster that happened at the Chernobyl power-plant was intentionally, and used to cover up the failing of the Duga-3 project. While building was completed and tests were being commenced, a check by the government to formally determine if the radar system was working turned out to be scheduled a couple of months after the disaster at the Chernobyl power-plant happened. As you might have read in my blog about the Chernobyl disaster, it happened due to strange circumstances. A test at the power-plant was executed at night which should have never been executed. The night shift at the power-plant commenced the test on order of their superior(s). Was this high-ranked political figure, that was responsible for the Duga-3 project, able to give such an order. According to the investigators in the documentary, yes.

Testing if the Duga-3 radar system actually worked would bring to the light that it didn’t. The project would have failed and the man responsible would receive the death penalty. Now that the radar system had to shut down because of the Chernobyl disaster, the test by the government was not being commenced. No-one would officially know that the radar system didn’t work. The man in charge of the project would later receive a promotion. Obviously, this theory has never been confirmed. I would advise to check out the documentary and see what ‘evidence’ the investigators are basing this on. For the record, I’m just sharing what I’ve learned during my research.

While driving towards the area I noticed that all the trees in the area were perfectly lined up. The guide told me that the trees were planted in an attempt to hide the radar system and the area surrounding it. The existence was a big secret, and it wasn’t until after the fall of the Soviet Union that it became public knowledge. However, the NATO was aware of it from the very start of the project.

I arrived at the entrance of the area and saw these two green fences with silver stars on them. The antennas were right behind them. On the right side, there was a smaller door which was opened so that we could enter the area. Still not knowing the area was so big, I thought we would be done here within the hour. In the end, we stayed for a whole day and still didn’t see everything, which is why I’ll be going back later this year.

The area was massive and the residents really had everything they needed nearby. It was a whole city with a lot of apartments, gyms, a cinema, schools, a fire department and lots of other places to work. The residents were instructed to not share where they were living with outsides, nor were they allowed to talk about the work they did anything else from the area. It was not to be disclosed that the radar system existed, and where it was located.

After entering the area, we ventured of to one of the largest buildings in the area. It was the main control center for the radar system. A lot of it had been stripped but luckily enough there were many interesting parts left to see. The building was in a bad condition and while walking around I carefully had to watch my step. The hallways were very dark and there were holes in the floor and stuff lying around everywhere. Next to that, it was so big that I could easily lose track of where I was so I had to pay attention. The light was beautiful though, and I really enjoyed that.

Next to the big main control room in this building, there were many other rooms and also a smaller control room. Unfortunately, I do not know the purpose of it but it looks very interesting. A 3D version of a partial globe was located at one of the walls, in beautiful blue colours. It was fairly intact, in contrast to the rest of the room where all parts that had any value had been removed. I’m still wondering whether it has been stripped so much for the financial value or to cover up the work that was going on here. I have a feeling we will never know.

Beside the control rooms that were inside there were a couple of other rooms with interesting objects as well. In one room, I even found a piano, which I would have never expect to find in a building as such. It looked like the same type of piano that I found everywhere else in Chernobyl. Perhaps it was simply brought here after it closed down for whatever reason. Or, it was actually used for entertainment and make music.

The Duga-3 area had much more in store, and after seeing this I got very excited to see the rest.

Everything in the area was done and visited by foot. It could take between 15-30 minutes of walking to reach the destination. I’ve been inside of apartment blocks, gyms, the cinema and a lot of other buildings. The apartment blocks were mostly stripped with here and there a piano that was left behind. Below I would like to show you a couple of photos that I made while exploring the area around of the antennas. This was part of the daily life of the residents.

Next to the places above I also ran into the buildings below.

In summer 2018, I will be going back to the area to shoot other parts that I haven’t been able to explore before. I can’t wait to return. The atmosphere is so impressive, and knowing much more of the history area this time I am sure that it will be a completely new experience.

30 Photos Of Duga And The City Of Secrets | Veriyreply

30 Photos Of Duga And The City Of Secrets – Boredmondayreply