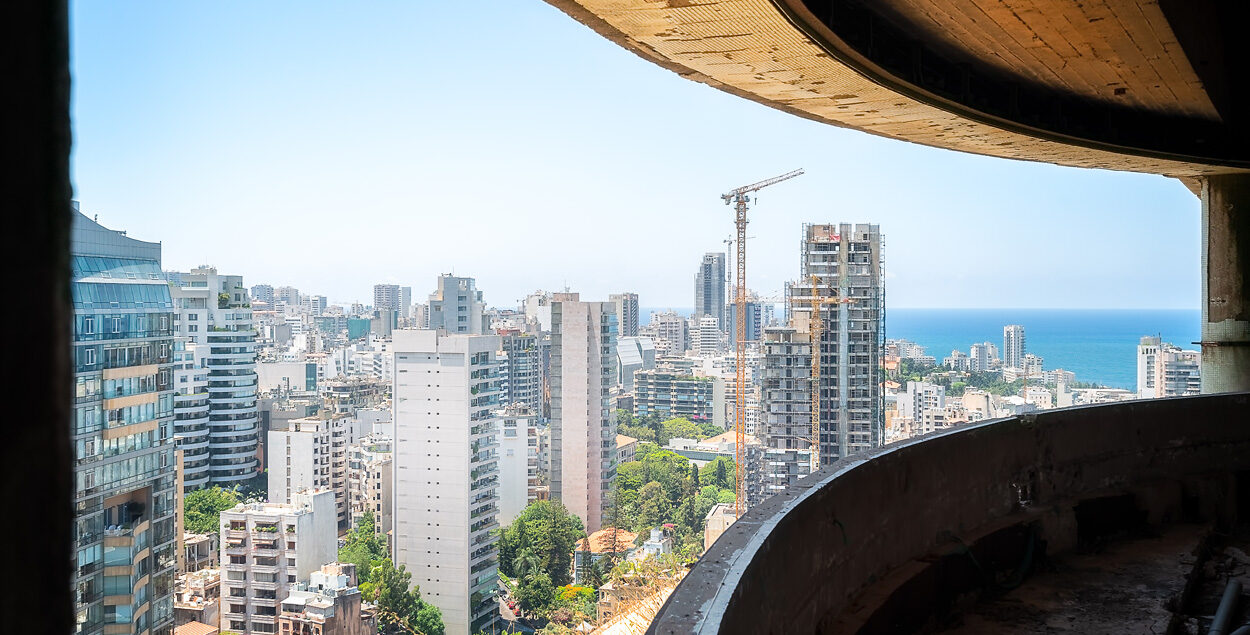 The idea of an abandoned hotel is always somewhat eerie. It’s a reminder of the passing of time, especially when you consider a build that was once a symbol of luxury, high life, energy, and color. Now, it is sitting in disuse and decay; its a better day but a distant memory in the minds and perhaps, hearts of a few locals who still look back on the old days. Such happens to be the case of the abandoned Holiday Inn Hotel in Beirut, Lebanon. Only this time, the hotel was never really a symbol of luxury but rather a symbol of war, standing tall as a reminder of one of the darkest eras in Lebanon’s history.

From the outside, the Holiday Inn Beirut appears grey, decayed, and lifeless, a carcass of what was once a sign of growth and development in a country with high aims, propelled by an economic boom that pushed many international investors in the country as well. However, everything came to a grinding halt due to the Lebanese Civil War breaking out in 1975. Sadly, this particular hotel didn’t even have the opportunity to enjoy a long-lasting life, as it was only built-in in 1971.

The hotel opened in 1974, serving customers for barely a year before the war essentially caused the hotel’s area to become the epicenter of an all-out war zone. Overnight, Beirut turned from a fabled tourist attraction in the Middle East to a haven for fighters and combatants. The area was home to various luxury hotels, which for months became a war theatre with over 25.000 fighters in what became known as the “Battle of the Hotels,” a form of urban guerrilla that was chaotic and extremely destructive for the city and its inhabitants alike. Thousands of people died or became seriously injured, with many people being thrown from the roof of the Holiday Inn. Because it was tall and towered over the city, the hotel became a favorite location for snipers, who hid in the upper floors and on the rooftops, breaking havoc on enemy forces on the ground. Opponents tried to destroy the building with heavy artillery from surrounding rooftops, and it is still possible to see damage from those deadly attacks to this day.

The war finally ended in 1976, but the hotel never fully recovered from the horrors of the fighting. In addition to that, scavengers also stripped it down. People essentially took everything but the concrete bones of the building, which at this point was completely gutted and covered with bullet holes. If this wasn’t enough, the hotel became a battlefield once again as the Lebanon war broke out in 1982, further damaging the already derelict structure of the building. For a time, the hotel’s skeleton became a beating heart for the underground youth scene, as it hosted various events, dance parties, and raves throughout the 90s. Many drew comparisons between what was happening in Beirut and what was happening in Berlin, Germany, right after the collapse of the wall. Back then, many young people were reclaiming decayed and abandoned urban spaces as venues for underground art and dance events that would eventually shape the local underground culture scene for many years to come.

Today, the building is still owned by two separate entities, and one of the main reasons why the structure still sits in disarray is the fact that there is a disagreement as to the faith of the building. One of the owners wants to renovate the building, while the other wishes to demolish it and start from the grounds up with a new, more modern tower. To this day, the area is considered a military zone, under the strict control of the Lebanese Army, which restricts access to civilians.

Specials thanks to Silat for culture and lebaneseurbex for arranging my visit to the Holiday Inn hotel in Beirut, as part of my Heritage Management Organization visit to Beirut and Lebanon.

More photos of the abandoned Holiday Inn Hotel in Beirut, Lebanon, can be seen below: