“The forgotten” holds a very special sort of fascination. Decay, where once was luxury. Stillness in places that were bursting with life. Powerful reminders of changing tides and changing times. The new book from photographer Roman Robroek captures the spirit and perhaps the ghosts of places that hold stories and past lives. From the abandoned city of Chernobyl, down to the guts of old European theaters, abandoned buildings used as famous movie sets, and lavish palaces far from their former glory, he has seen it all, capturing beautiful images through the scope of his lenses. 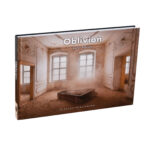 One of the definitions of the word “Oblivion” is the state of being unaware or unconscious of what is happening around one – the state of being abandoned or forgotten by the general public. The dualism in the book title reflects the moving and one-of-a-kind story of each place photographed by Roman. As an award-winning photographer, he developed a particular fascination with urban landscapes. As he continued to explore different places and new cultures, he realized that he could find empty buildings and decaying sites pretty much anywhere around the world. It feels like the ghosts of former buildings are almost like a constant element, binding together different places and igniting the spark of his curiosity. Roman became quite interested in this particular aspect of his creative journey, and he set out to continue to travel the world to immortalize some of the last remaining traces of times long gone. 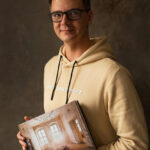 Hungry for more than just pictures, Roman took a closer look, hoping to answer some open questions, or at least to come closer to understanding the who, why, and how of all of the haunting locations he explored. He would approach his photography as someone with a desire to document, but also as someone who can see the beauty in a cracked ceiling, the textural qualities of decay, which in some way, might represent nature taking over in the ever-so-delicate balance of mankind making, and having to constantly struggle with time and things that happen around us. Oblivion is a closer look at places that remind us that we don’t live in a vacuum and that nothing lasts forever. Life is transformation, and loss can be a gateway to change or even opportunity. Every abandoned site is not just a crumbling pile of materials, but an intersection of fortuitous events, characters, choices, and so many other things that led those places to fall into their current state.

Released with Jonglez Publishing, Oblivion is a very special work of or art. The book is elegantly bound, and it features a stunning hardcover, with 256 pages featuring images, as well as descriptions available in multiple languages (English, French, German, Italian and Spanish). The book is currently available for order on the following links for only €35,- – $39.95 – £29.99:

If your country is not listed above, you can order the book via this link.
You can also check out your local (online) bookstore.


Hi! I've been away for a while, taking a break fro

Thanks Madeira, you’ve been amazing. See you nex